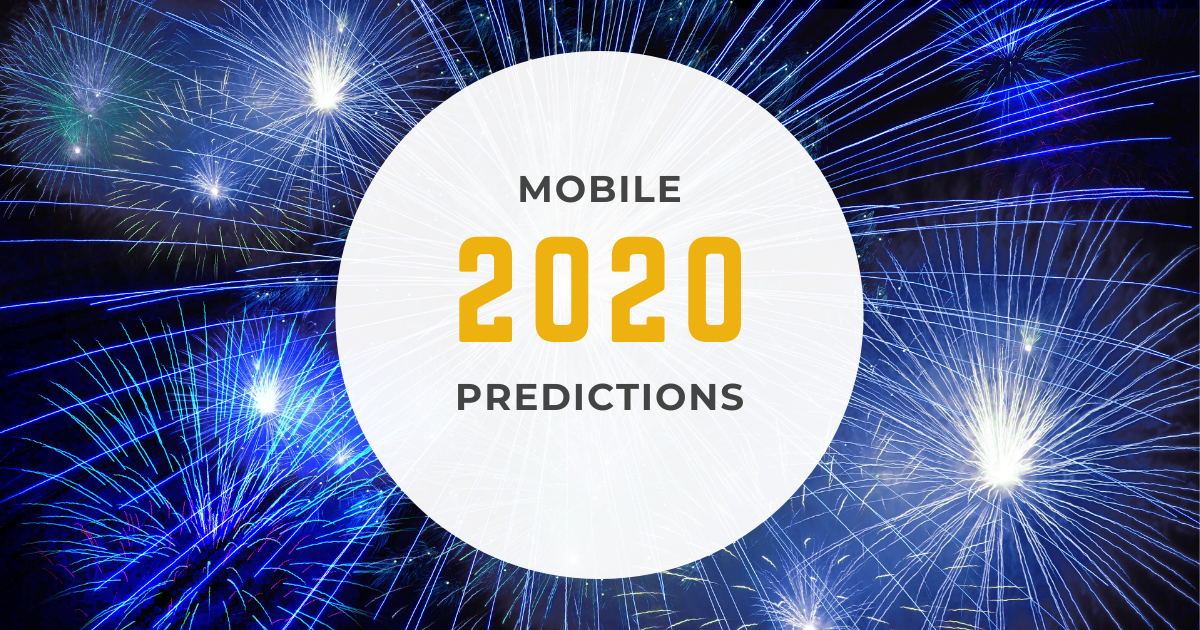 As an app development shop, part of taking care of our customer’s current needs is to keep our eye on the future to see what’s on the horizon.

Predicting where tech is going to go can sometimes be a crap shoot, but who better to roll the dice than the folks steeped in tech every day?

In that spirit, here are 9 tech trends we see happening in the coming year.

Listen as Tim and Rob discuss their thoughts on the future of the industry in this podcast episode.

Businesses will spend more money on their internal software tools.

Okay, we get it: pretty lame for the first prediction.

But hear us out!

As the general labor force continues to bring in younger workers, these tech natives will bring along an expectation that their job can be performed anywhere they want. Whether it’s connected to a desktop in the office or a tablet or portable computer on a beach, workers are going to want to work for businesses who enable this flexibility.

In addition, the days of using pen and paper are quickly falling by the wayside. We’ve seen the benefits first-hand when businesses move to an all-digital process. Painters, for example, can use a mobile app to quickly estimate cost, as well as use augmented reality to help a customer visualize what a color might look like on their wall.

Not only do these tools help upsell, but they also allow you to capture a lot more data about your customer or lead. This data can be used to predict user’s behavior, test possible new product lines, or simply make sure that nothing gets lost in translation between the work site and the paper.

One other reason why we think internal tools will continue to grow in popularity: the impending recession. Businesses are always looking for ways to invest in their team to save money. Automation and digitization are excellent ways to do that, and we think that despite a recession, businesses will invest in these capabilities to give their firm an advantage over their competition.

Apple has been pushing augmented reality (AR) for years now. We still think the technology is in its infancy, and it is going to be a while until we have some sort of device which can perfectly incorporate AR in a seamless, helpful manner.

Since this is a post about predicting what will actually happen in 2020, we think that businesses should start using 2020 to skate to where the puck is going to be with regard to AR.

We believe AR can have a much larger impact on the world than VR (virtual reality). Whereas VR takes control of a user’s senses and creates an artificial world for the user to occupy, AR’s purpose is to enhance reality.

Much like machine learning, AR wouldn’t be useful for every app. We see it as a tool that we can wield when necessary, and we are keeping our eye on it for when it makes sense to start including it into more business tools.

If you’ve ever used your phone or watch to pay for something instead of a credit card, you’ve experienced NFC in action.

Phone vendors like Apple and Samsung have included NFC in their devices for a while, but as the adoption of this technology accelerates, we think that we’re going to see this technology applied in more spaces.

Essentially, if you consider any card you carry with you to access a building or parking garage, that could be made obsolete by tapping your phone instead.

In 2019, several Android device manufacturers released bendable phones. These are devices with full-body screens that can fold in half.

The viability of these first devices remains to be seen. Early reports show that bubbling can occur after a couple thousand uses. In a world where people check their devices dozens of times per day, that is not very promising.

However, we think that in 2020, we will start to see bendable screens in more places. Wearables such as watches might be a strong application of this tech, for example.

It’s interesting to imagine where a bendy screen could possibly fit into current applications. If you combined bendy tech with augmented reality, perhaps we could see a translucent screen that looks good on a dashboard of a car?

We often use the holidays and the end of the year to reflect on the past, and in that spirit, it is funny to think that we used to consider giant, 15” CRT monitors to be state of the art. Now, we literally have screens so thin and durable that we can bend them in half. Technology is amazing.

We saw some big lawsuits happen in 2019 around accessibility in mobile apps. The fallout from these cases is still unknown, but we do know that as a result, businesses are going to place a stronger emphasis on accessibility.

It stinks that it took some lawsuits for this to be a priority. In our experience, the more accessible you make an app, the easier it is for everyone to use it. The good news is that Apple and Google baked accessibility into their developer tools from the start.

It only takes a commitment from the development team to spend a little extra time and focus on optimizing the app for other UI mechanisms like VoiceOver. We think that businesses will prioritize that extra effort in 2020, not just because of the threat of a lawsuit, but because of the opportunity that comes with bringing in a large and often neglected market of users.

When the accessibility community finds an app that works well for them, they spread the word quickly.

The technology which enables our phones to be connected is ever-evolving. We expect the fifth generation of the wireless communication technology to become more ubiquitous in 2020.

As the backbone that makes cell phones work, 5G is an important next step towards having the internet everywhere. 4G (LTE), which is how most people receive a wireless signal these days, is relatively fast. Oftentimes, I’ll use LTE instead of Wi-Fi just because it is a higher quality connection.

5G will make that even better. Tests are showing that in some cases, you can get gigabit speeds. Along with the speed boost, the spread of 5G will allow for faster connections in more rural places both domestically and overseas.

It’s hard to imagine the full impact this will have on mobile apps. Before 3G was everywhere, we couldn’t have had apps like Uber or Instagram. In the near term, though, we can all benefit from faster, more reliable internet connections.

In 2018, the General Data Protection Regulation (GDPR) went into effect. The regulation intended to give users control over how their data is used. As a result, websites and apps needed to build functionality which lets users see all the data that a website has on them, as well as the ability to delete it all.

The regulation applied to businesses even if they weren’t based in the EU because the regulation protects the citizen, not the company. In other words, if a user of your app is from Romania, then they have the same rights regardless if your company is based in Minnesota.

Most of the larger, US-based apps took the opportunity to make their apps compliant with the new regulations, but many smaller apps took the chance of non-compliance because they assumed they would never have a user from the European Union.

This logic may have worked in the interim, but as of January 2020, the California Consumer Privacy Act (CCPA) will go into effect.

The CCPA is similar in intent to the GDPR. Users are expected to have the ability to know what data is being collected about them, know whether their data is sold, say no to the sale of that data, access their personal data, and request that their data is deleted.

We think many of the major apps already have these capabilities in place as a result of the GDPR, but because this act hits closer to home, we believe most apps will begin to adopt policies that will help protect user data and give the user more control over how that data is used.

When we started doing these prediction posts, we said that it was cheaper and easier than ever to include sensors in everyday devices like toasters, doorknobs, and fans.

While that was true, the big thing that was missing was an easy interface to tie everything together.

As more people get Amazon Echos, Apple HomePods, and Google Homes in their houses, the ability to yell a command at the air and have devices perform actions is becoming easier and easier.

In 2020, we think it will get even easier to be part of the Internet of Things. Apple, Amazon, Google, and the Zigbee Alliance recently announced an alliance called CHIP (Connected Home over IP) to create a standard that will increase compatibility of smart devices with each other.

We think as more “things” we purchase include the ability to connect to the internet, and as it becomes easier to connect with these devices, we’ll see a steady growth in the adoption of IoT in everyday life.

The other day, I was playing with my 3-year-old daughter. Without really thinking, I pulled my phone out of my pocket and started checking my email.

When I looked back up, my daughter had walked over to her play kitchen and grabbed her pretend cell phone. She was tapping away at it, pretending to look at something.

I was shocked. She’s only three, but she knows that I am looking down at this device all the time, and for basically no reason. I mean, how long will she be three and actually want to play with me?

More reports surface daily about the dangers of social media, specifically how it is engineered to be addictive and how it negatively impacts mental health. We spend an insane amount of time staring at our phones, with the average American spending 5.4 hours on their phone per day. 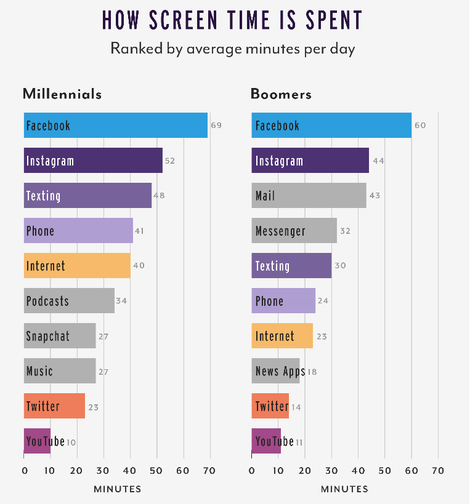 Apple and Google, for their part, have tried to help curb the amount of time we are on our phones by introducing features like Screen Time and Digital Wellbeing.

While we hope that 2020 is the first year that we start to see a downturn in the amount of time spent on a smart device, we don’t think that is realistic. As app developers, our goal should not be to find ways to trap people into using our products; we should be helping our users get their job done so they can get back to living their lives.

If you’re interested in weaning yourself off of your smartphone, we suggest Cal Newport’s book called “Digital Minimalism.” It’s a great guide in learning how to make your phone a tool that works for you instead of a black hole for your time.