What is Technology's Impact on the Environment 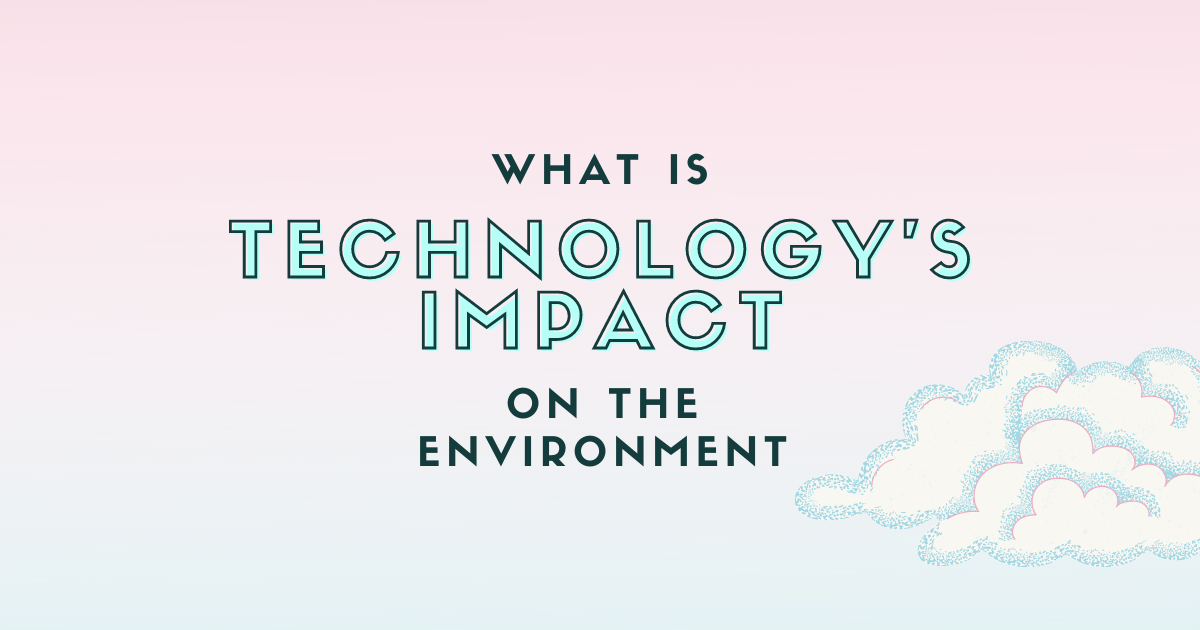 What effect does tech have on the environment?

Ever since the iPhone was released in 2006, an increasing amount of our lives takes place in the virtual space. This trend accelerated even quicker with the rise of the COVID-19 pandemic in 2020.

Since most of our life "in the cloud" happens with us staring at our phone, we don’t often take time to reflect on the impact this device has on the physical world around us.

On the surface, our lives are pretty great as a result of the conveniences the smartphone brings. We can literally have groceries, food, and even pets delivered to us on demand. Any trivia question you can muster is easily answered with a quick search. We can reconnect and see our loved ones instantly with a simple video chat.

But have you ever taken a second to think about the infrastructure required to bring all of those conveniences to us?

In this article, we will discuss the hidden impacts that our interconnected society places on the environment.

Since the time our species discovered how to control fire, we've rapidly increased our demand for energy.

At first, that energy was mostly generated by chopping down trees in our backyards and burning them to keep our families warm.

As our technology improved, we learned how to generate power with some sustainable methods (hydroelectric dams and windmills, for example), but mostly, we generated energy by digging up materials around the earth, like coal and oil, and literally lighting them on fire.

We are still trying to understand and quantify the damage that releasing all of that carbon into the atmosphere has inflicted on the earth. Even still, while we know we have an impact, it doesn't mean our demands for energy are going down anytime soon.

So until we are able to create a Dyson Sphere, we are left with an interesting dilemma: how can we continue to power our lives without causing catastrophic damage to our planet?

What does that have to do with tech?

Did you know mining for Bitcoin consumes more yearly energy than the entire country of Argentina?

Did you know if the Internet was a country, it would be the sixth most polluting country in the world?

That’s a lot of energy, and you might wonder exactly what is gobbling up all that energy. In order to explain it, let’s do a simple thought experiment:

Imagine you want to use Uber to get from your house to work. What parts of that trip require energy?

Well, first and foremost, you’d probably think of the gasoline used in the car. That’s certainly one part.

Second, you might think about the energy from your phone. You plugged it in at night to charge it up, so that required some energy. Then, while you use the Uber app, your phone needs to power the screen (which is easily the most energy-intensive component of your phone), the cell radio that connects you to your 5G cell service (which is probably the second most energy-intensive component), and a GPS chip to continually monitor your location (which is also a huge energy hog).

Let’s also consider the driver’s phone. They will need all of the same energy demands as you, but they’ll also need their turn-by-turn directions on in order to get you quickly to your destination, which uses a considerable amount of energy to compute.

That about sums up what energy is being used that you can see and hold in your hands.

Now what about the stuff you can’t see?

Servers are essentially computers that are built to handle massive amounts of data. These machines run 24 hours a day, 7 days a week, and dutifully collect, process, and distribute all of our virtual lives.

Every app you use connects to a server of some sort. Oftentimes, the apps you interact with use more than one server at a time. Facebook, as an extreme example, has data centers all over the world, with more than 15 million square feet of data center space containing hundreds of thousands of servers.

When you launch the Uber app, it instantly launches a connection to the server to start finding cars near you. When you book the request for a driver, it immediately starts sending your location up to the servers, and it continually does so until after you’ve arrived at your destination.

While en route to your destination, both your app and the driver’s app are constantly in communication with these servers, transmitting information about where you are, the best route to get there, and your estimated time of arrival.

Those last two pieces (“the best route” and “estimated time of arrival”) are continually being calculated. Those calculations require a lot of processing power to compute, which, in turn requires a lot of energy.

So where does all of this energy come from, then?

Our power grid consists of a hodgepodge of sources, both renewable and not.

As of 2019, around 17% of our electricity was generated in the US from renewable energy sources. Even if by now (2021) we've made it to 25% of energy being generated from renewable sources, that still means the majority of our energy is powered from sources that are slowly killing our planet.

But even if we get to a point where all of the energy we use is generated from 100% renewable energy sources, we would still need batteries to store some of that energy for when the sun isn't shining and the wind isn't blowing.

The best batteries we have today require lithium to manufacture. Lithium is certainly less harmful to produce than extracting oil from the earth: the best method we have for extracting lithium today involves using the sun to evaporate salt-rich water in a Chilean desert.

Even still, extracting lithium causes water-use issues with local communities and is causing borax to be released in highly toxic doses which isn't harmful to humans, but is causing the Andean flamingo to become vulnerable to extinction.

Looking back to our Uber thought experiment, you might wonder where the energy came from to perform those calculations. Some data centers are starting to generate their power from renewable sources. Uber themselves recently announced a goal of getting their data centers to be powered by 100% renewable energy by 2030.

That’s awesome, but what about for the next 9 years? How much more coal and fossil fuels will we need to extract and burn in the meantime to get ourselves to our destinations?

So what's your point?

We take a lot for granted with our modern technology. Our species has evolved to the point where any of our modern "inconveniences" are something that our ancestors would be unable to imagine. It’s not uncommon to hear someone complain about waiting in a self-checkout line for 5 minutes to purchase pre-processed and highly nutritious meals for the week without a trace of irony.

This shielding occurs in many messy areas of our lives. Have you thought about how wastewater gets treated? How about where garbage goes?

I'm not an extremist in my worldview of technology or modern conveniences. I don't think it's productive for us to find ways to force ourselves to use less technology (although we absolutely should find ways to use technology responsibly).

My argument is that it is important to understand how the world actually works. You might love the connectedness that Facebook affords, or the access to knowledge that Google offers, or the escapism that a binge session on Netflix provides. Just like waiting in line at the grocery store, those are all luxuries that our ancestors would be unable to comprehend.

But when you load Facebook for the 20th time today, or get sucked down the Wikipedia rabbit hole, or yell at Peacock for poaching our beloved The Office from Netflix, you should do so with an acknowledgement that there is a price being paid beyond the price you pay for your energy and internet bills.

So what are you doing about it?

As a contributor to the digital ecosystem, the team at JMG feels it’s part of our responsibility to reduce our digital carbon footprint by taking steps to build and promote “green” apps. We’re just dipping our toes in the world of sustainable tech, so stay tuned for more content pieces (and eventually, services) around digital sustainability.